As Hamilton spent July 1st in lockdown without fireworks or in-person Canada Day festivities, hundreds of people gathered in an afternoon vigil to honour Indigenous women who have gone missing or been murdered in an ongoing, centuries-old national genocide. The “No More Stolen Sisters” event, held at the Claremont access on July 1st, featured storytelling and calls to action against anti-Indigenous cultural and systemic violence, racism, and misogyny in the colonial state of Canada. 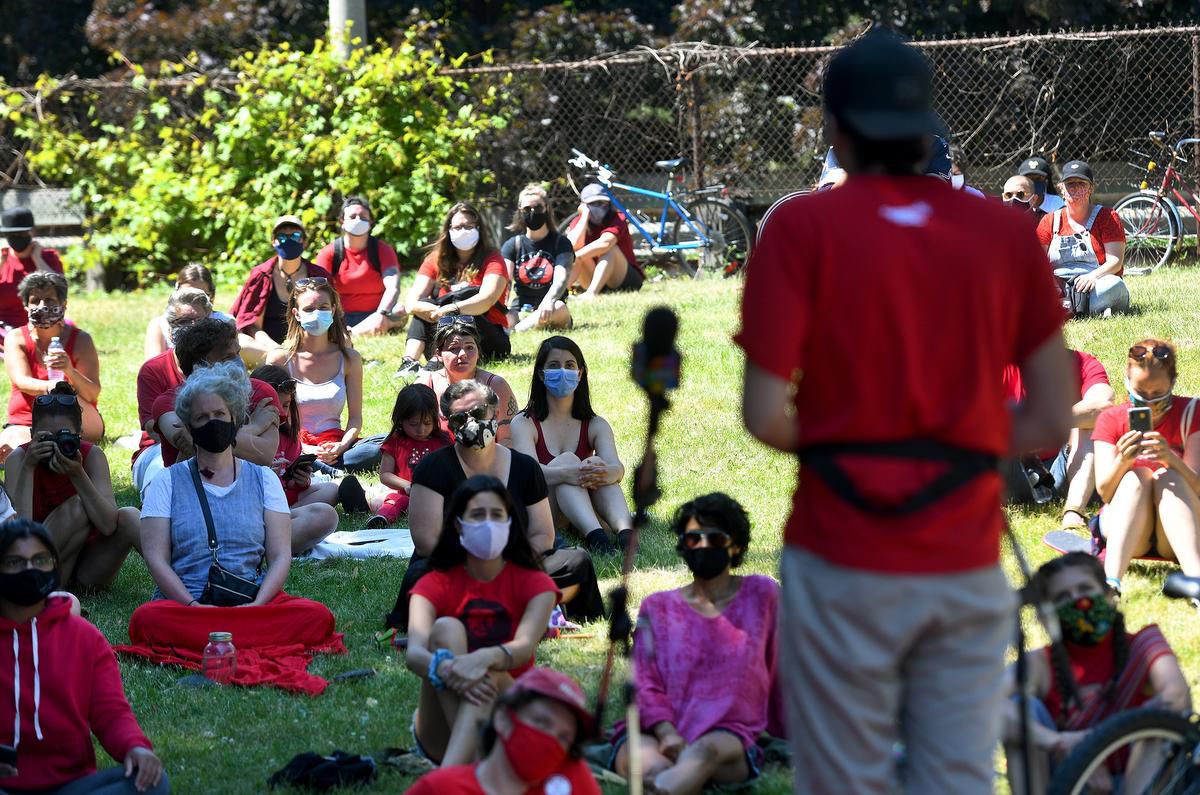 A particularly powerful testimony came from an Indigenous woman who narrowly escaped death several years ago in Hamilton. “I’m one of the very, very, very lucky ones - I got to make it home to my family. I feel that it’s my job to speak up and tell my story”. The woman was adamant about sharing how many Indigenous women face systemic and police discrimination for having a drug dependency, on top of the discrimination they already face as Indigenous people and women: “It’s got to change [in Hamilton], people have to get rid of the [taking drugs equals deserving of harm] mentality”.

The No More Stolen Sisters vigil attendees also brought dozens of red dresses to hang from trees, an homage to Métis artist Jaime Black’s REDress Project. Years ago, as Black listened to a conference presenter in Germany speak about missing and murdered Indigenous women and girls in Canada, she experienced a vivid flash of imagery: dozens of dresses, hanging from stark branches and dancing in the wind. The dresses in Black’s vision were uniformly red: “red to represent women of the red nation, red for life blood - women’s ability to give life”. 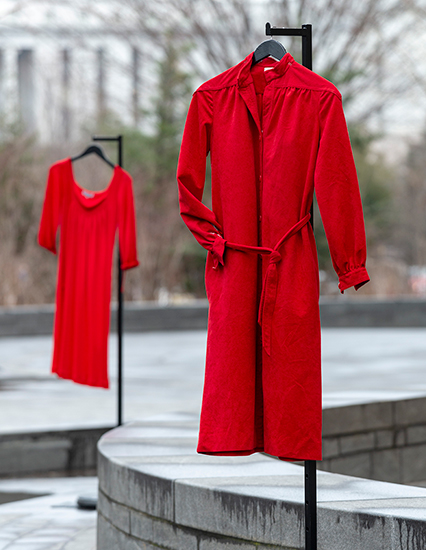 By the time Black’s goal of 500 red dresses became fulfilled through donations in 2011, her project had gained national recognition. As of the present day, Black’s exhibit has been shown in numerous cities across Turtle Island; from Edmonton, Alberta to Washington, DC. The REDress project took on new life, as Indigenous vigils and protests began displaying red dresses in remembrance of missing and murdered Indigenous women and girls, such as the dresses displayed two week ago at Hamilton’s No More Stolen Sisters event. 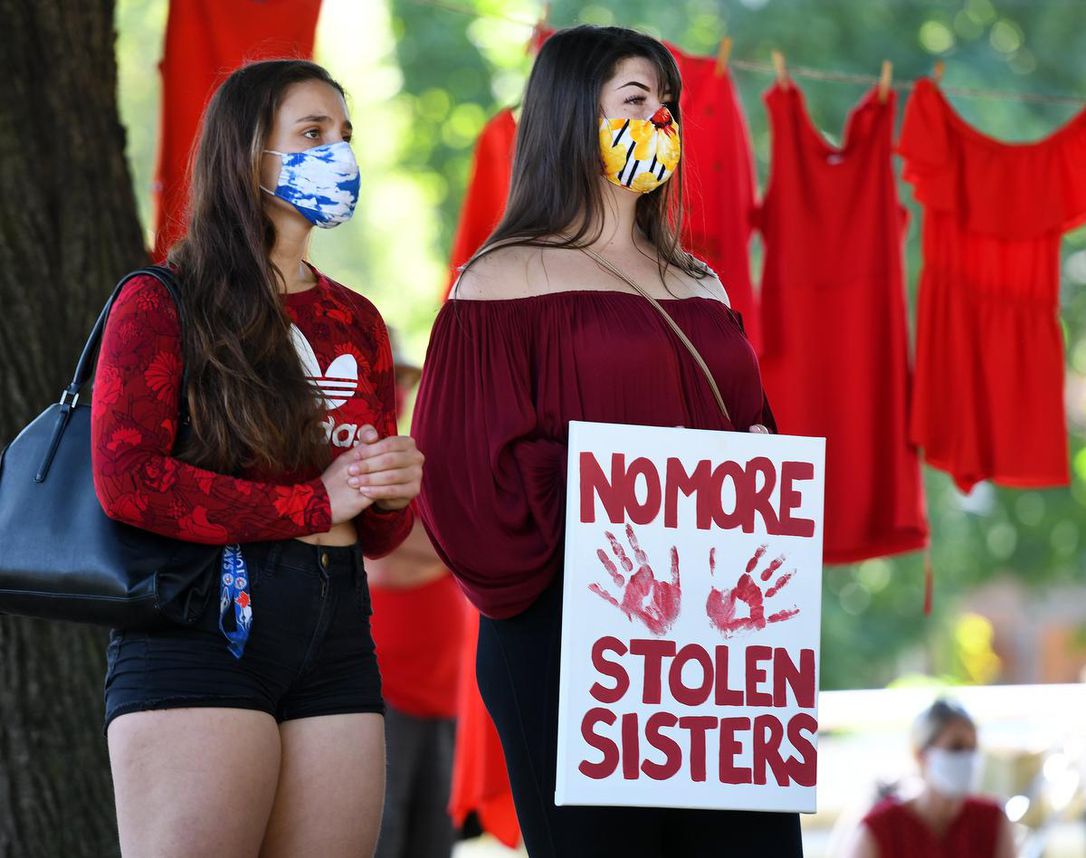 Regardless of the dresses’ location, passersby watching the garments twisting in the wind are often brought to tears; as the empty red dresses powerfully symbolize the absence of the bodies that should fill them. In Black’s gallery exhibits, dresses have blood-red petals beneath them, arranged in a perfect circle - a reminder of blood shed by women whose lives and deaths were never given justice. And at Hamilton’s No More Stolen Sisters vigil, several small, red dresses were brightly adorned with intricate stitching - dresses clearly made for children, meant to honour the Indigenous girls stolen from their families and murdered by Canadian “forced adoptions” and residential schools. Through the imagery of the red dresses hanging in the trees around them in the Claremont access park, vigil attendees were reminded of Canada’s colonial state and settler apathy to Indigenous deaths;  alongside local, systemic violence and acts of racism inflicted against Indigenous people in Hamilton.

Jaime Black’s friend once told her that red is the only colour spirits can see; and thus her red dresses call the women they honour home to rest. The attendees of the July 1st vigil in Hamilton for Indigenous women and girls felt similarly as they sat listening to the stories of resilient, powerful Indigenous women who are still here; living their lives in bold defiance of Canadian state violence meant to erase them from history. Jessica Bonilla-Damptey, member of the Sisters in Spirit Committee and representing Hamilton's Sexual Assault Centre (SACHA) at the No More Stolen Sisters vigil articulated this vigil-wide solidarity best: “seeing those red dresses [and how they were] flowing in the wind was really impactful​​​​​​, just knowing that those sisters were there in spirit".

To learn more about the No More Stolen Sisters Project, click here.