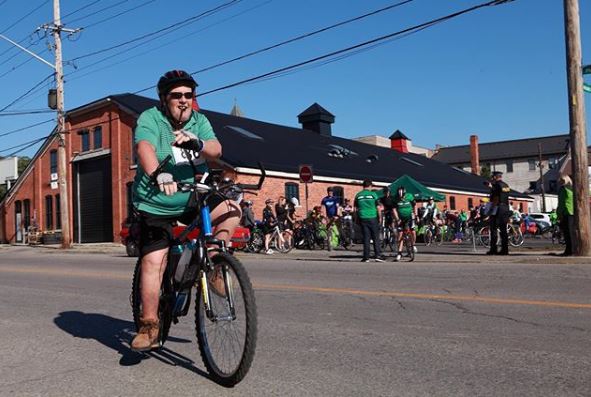 When I went to attend the Cycle Hamilton monthly meeting on March 25th, it was because I had been hankering to get more involved in the cycling community through volunteering. As luck would have it, Theron from the Everyone Rides Initiative (ERI) team was at the meeting to discuss the ERI program, and asked for volunteers for group rides. I jumped at the chance- I think I even waited a few days and then emailed Theron, to be a pest!

Soon enough, I found myself taking Can-Bike Level 4 training, a Canadian bike safety training program whose classes were sponsored by the ERI team. This course was spread over 2 days- the first day being theory and safety, then the second day being practical training, or learning how to ride bikes around the city safely. It was an optional course for me, but I got to put those skills to good use, when I joined the ERI team as a group ride volunteer and mentor.

My first group ride with the ERI team was the Spring Roll Ride, to the Cycle Hamilton Annual Meeting. The Cannon Street bike lanes being shut down made it an interesting route. After the ride, I spend some time with Thea and Theron at different pop-up locations, learning more about Hamilton Bike Share and the Everyone Rides Initiative.

The next group ride I went on was the Pride Ride; which went from the Bike Rodeo at Carter Park to the Pride Celebration at Gage Park. I rode as a ride anchor for this ride, and got the chance to talk to a young man who was riding on the sidewalk as the ride went east, even though the majority of the ride was on the road in bike lanes. He said that his mom wouldn't let him ride in bike lanes, because they were dangerous- so we talked a bit about biking, specifically braking and shifting gears. This ride really increased my desire to mentor people on bike riding, safety, and route planning.

The next group ride the ERI team held was for the Pride Rally, and I rode with them from Powell Park to City Hall. We had just met with the Gibson and Landsdale Association (GALA) and wanted to include them, so the ride was held one of GALA’s neighbourhoods, which was a nice way to connect with community.

My time as an ERI Connector

Working with partner organizations, such as going to the 541 Eatery & Exchange to staff the ERI pop-up desk, was a big part of my summer. I had the chance to meet lots of people who, if it wasn’t for the ERI program and partner organizations, might not have gotten the chance to ride a bike. There are so many barriers to riding a bike, and the ERI program helps eliminate a majority of them.

We also met with neighbourhood associations at their community meetings, and talked about Bike Share and ERI- there were always passionate discussions about bikes, bike safety, and issues we want to fix in Hamilton.

Though rides are generally my favorite activity, getting out at events, meeting people, and sharing all we had to offer was also pretty awesome. The smile on someone's face when they learned they could get a $1 a month Pedal Pass, or a free Tandem membership through a partner organization, was the best part (OK, riding the 3-wheeled bike from the ERI office to Gage Park was pretty great as well).

I know that my summer as an ERI Community Connector was just the start of my involvement with the Everyone Rides Initiative, and Hamilton Bike Share. 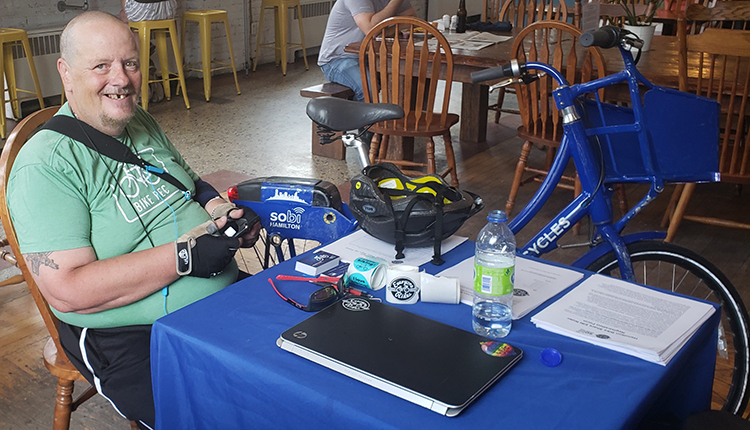 Be Safe, Be Seen, and Pedal On- and Thanks for Reading!
Mark Anderson, ERI Connector