Niv Shimshon is an ideal storyteller-- he loves listening to the experiences of his community, and sharing stories as they were told to him, word for word. When I first found Niv’s work online, I was moved by his BIPOC Voices project and wanted to speak with him about his work.  A week later in mid-March, we met virtually for a casual interview to discuss how the BIPOC Voices project came to be, and the impact of its stories.

Shimshon, a professional photographer, emigrated from Tel Aviv, Israel in 2013 and landed in Parkdale, Toronto. A few years later, Shimshon and his wife made the decision to move to Hamilton, seeking a neighbourhood whose community circles “wouldn’t be so tiny- where neighbours know one another and kids play together in the local park”. The family settled in Hamilton’s St. Clair neighbourhood, where they quickly bonded with friendly, lifelong city residents and newcomers alike.

When COVID-19 hit Hamilton in early 2020, Shimshon’s commercial photography events were mostly cancelled. He decided to focus on building up one of his ongoing projects, which he calls BIPOC Voices (BIPOC stands for Black, Indigenous, and people of colour).

Describing how the BIPOC Voices project began, Shimshon states, "A friend of mine here once told me her stories about the racism she experiences. I asked her if I could take her portrait and share her words with others”.

I asked Shimshon: why did it feel important at that moment to take his friend’s portrait and share her story? He paused to reflect before replying.

“In the last three years, there’s been a lot more dialogue around racial issues, how it’s not a Black problem, or an Indigenous problem [in terms of reacting to racism], but actually a white [people] problem. I didn’t have a lot of money, but I had my photography. I thought I could offer that [for free] to my community as a way to help amplify people’s voices… and this became the BIPOC Voices project”.

BIPOC Voices quickly grew through Shimshon’s own promotion on social media, and word of mouth amongst his photography subjects. When the Black Lives Matter movement revitalized in 2020, Shimshon contacted the organizer of Hamilton’s March for Black Lives event, Amani Williams, to ask permission to set up his camera and a backdrop at the event’s second rally.

In June 2020, Shimshon made his way to downtown Hamilton’s March for Black Lives starting point; where he set up a temporary studio to take pictures of local residents and activists advocating for the protection of Black lives. He continued documenting BIPOC stories after the March for Black Lives, recording stories and taking portraits around Hamilton.

Mixing natural light with flash, Shimshon’s portraits illuminate their subjects’ faces with warmth and intensity. He mentions that he is adapting his photography methods in future and re-shooting some of his subjects, along with moving more towards black and white film portraiture.

“With colour photography, your eyes are always running to colours, chasing them. I want people to be photographed in black and white lately to let viewers go more towards the expression of the person-- instead of, for example, their red shirt”.

Shimshon hopes the BIPOC Voices project reminds viewers that there is beauty and joy in community and resilience, and not only trauma and hardships.

“It’s important for me to say, I’m not trying to only photograph and share stories of harm. There are many amazing human beings who are working hard to change this. I wanted to share both of those kinds of stories [from racialized people in Canada], and let people talk about whatever they felt they felt was important”.

The ERI hopes to follow Shimshon’s work, and the personal projects of his subjects, for years to come. We encourage you to read more of these stories on the BIPOC Voices web page and to follow him on Instagram.

To contact Niv Shimshon and be featured in the BIPOC Voices project, please email him at [email protected] or go here.

From the BIPOC Voices project, photographs and the story of Queen Cee Empyrean, a local Hamilton creator, mother, and businesswoman. All photographs by Niv Shimshon Photography, August 2020. 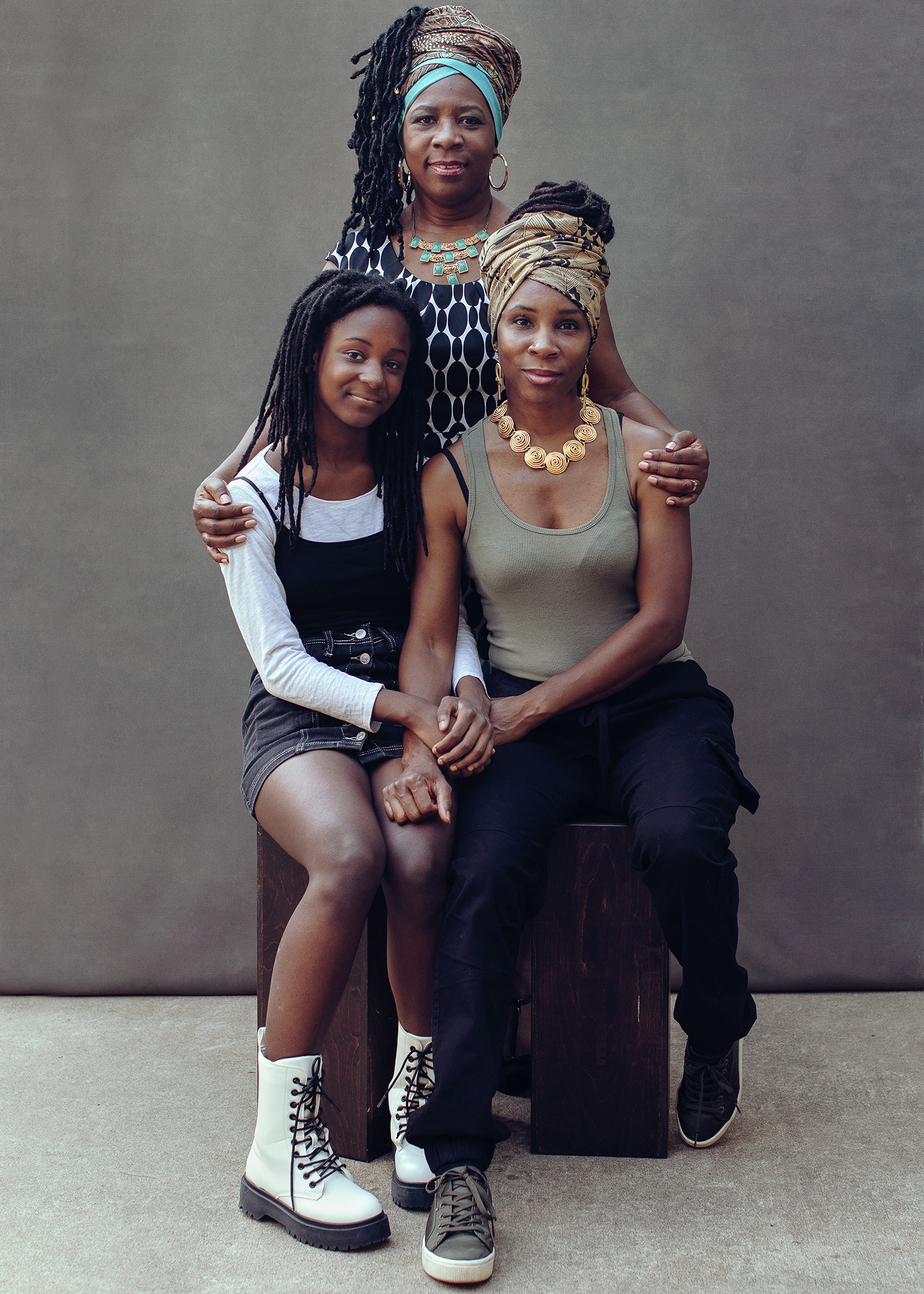 QUEEN CEE: "I feel like my personal life journey from Black girl to a Black woman is so layered and those layers have so many sections. And my journey starts from before I was even born, through my mother's own journey. Two major parts of my life journey have been influenced, inspired and empowered by my Mother (my Queen) and my daughter (my empress).

My mother inspired, empowered me to grow into the woman I would become, the community youth activist I would become and supported my passions as a musician and artist. She also inspired me to become the mother I would be to my 5 kids, which brings me to my one and only daughter and how I would inspire her, empower her and nurture her esteem as a Black girl because there are parts of her own journey I know she will experience and she will need to be built up for." 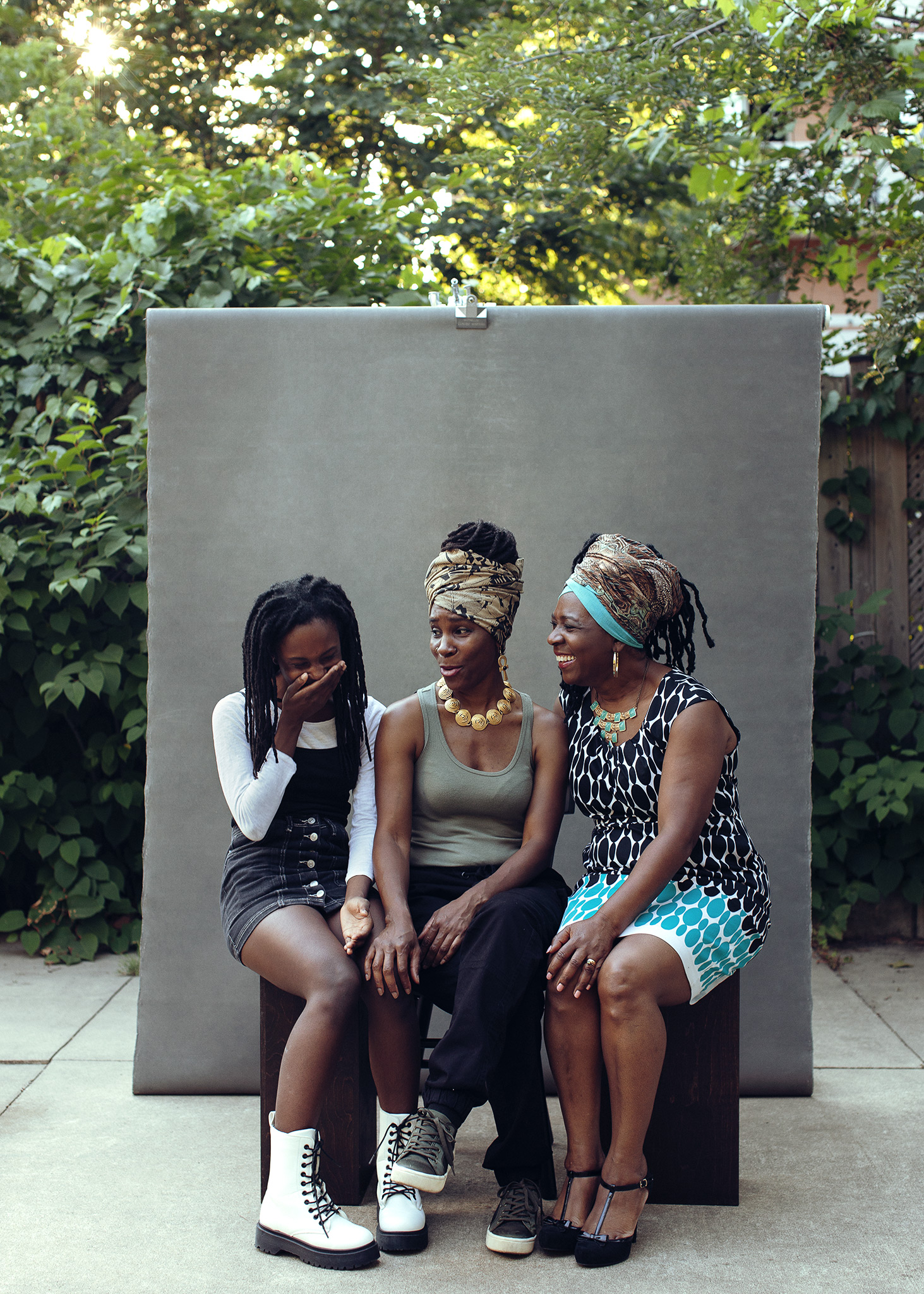 QUEEN CEE (cont.): "My daughter allowed me to develop in my 2nd transition within motherhood. She inspired me further to keep empowering community girls and also inspired me to start my own Black doll line from customizing Black dolls for her. The need was to make sure when she started asking for humanoid dolls it would be a reflection of herself and Black females around her. This lead to people asking me to customize different types of Black focused dolls for them which became a new artistic passion and developed skill for me that I never knew I had. This lead to me having the courage to help fill the void in the toy industry in regards to representation for Black kids in the doll market. All of this part of my journey is rooted in my daughter, Amora Sanaa. If it wasn't for her being born into my life none of this part of who I became and who I am would exist.

It all started with my Queen Mother who lead me to my Black womanhood and with my husband it continued through my children, which are leading me back to myself."

- Queen Cee Empyrean is a musician, artist, activist and the creator of Herstory Doll, photographed here with her mother Sharon Grant and her daughter Amora Sanaa. Hamilton, ON (August 2020).